Marzio Dall’Acqua. Chairman of the National Academy of Arts of Parma

If an uncommon artist loves telling a story of trees, shrubs, cane thickets and woods on great canvasses where brush strokes come together and overlap like leaves borne by branches; and if the same painter decides to make herself and integral part of the painting; if the same imaginative author feels rock and bark beyond what a furtive animal of the woods (perhaps a wild cat?) would, and thinks that the best gallery in which to exhibit herselfand her works is the very nature from which her inspiration, input, and thè ‘bang’ for a new artistic era came, then it is the moment to begin seeing things in a new way and perhaps re-define our habitual judgments on modern art in relation to contemporary society.

This is the case of Barbara Pecorari who, in this hook (of practical life but a little theatrical and above all virtual) has written the story and evolution of her own painting. Fifteen chapters told by canvasses instead of phrases; by leaves instead of words. We begin at the great tree from which hang paintings which sway in the breeze of the hills; then, the cat hairs among dry branches in mysterious allusions; the author then becomes a branch which imperceptibly blends with the burnt lands of Siena colours; the yellow of a fabled wood seeks to illuminate the dullness of dry leaves; light blue legs are an extension the blue sky at sunset; red hat, red arms and a red tub identify with the burning colour of the painting of a windy bathouse; a girl in a tutu drinks a fragment of a Divisionist table; the girl with the hat is fascinated by whirling leaves which come on like a swarm of bees from a petrified trunk; lunar-grey rock combines with the opaque rock of the hills, oppressed and covered by the earth. And further figures: a pitchfork overturning thè remnants of the same day after day; contemplating a story in painting of useless cultivation; on the shore of a lake to fill a at least a jug with poetry; brushing the ground around cypress trees to make them green and yellow like a painting from a dream and, in the end, the night with black on black which moves away in the second scene leaving only the false hope of a vangoghian light.

Is it reality, theatre, cinematography, painting or photography or literature?

The artist’s journey finishes here but palpable traces remain – these are her works realized through a particular technique – spiritual in its understandings but material in its execution. A little impressionist, a little divisionist, action painting in an aristocratic gesture, metaphysical in its solitude of lucid ideas; always contaminated but not banal; on the contrary – enchanting.

In the twists and turns of a journey undertaken several years ago by the young painter Barbara Pecorari, from Reggio Emilia, we recognize her love for the landscape where she happily spent her childhood, as well as the wild joy to daub her fingers and to rise waves of shiny colours feasting our eyes. The magic of poetic varnishing and linguistic invention interpose themselves between sensible object and work of art, touching the spectator. From her hands, another parallel world “aside” arises, in which reality tends to yield to the forms of thought and the naturalistic view is overcome through excited rhythms and music-like chromatic alterations. Indeed, colours, thick and concrete, are chosen on the basis of their expressive potential rather than of their adherence to reality. From these heavy pastes, spread with fingers, a spoon or a paintbrush tail in accordance with the artist’s feelings, there still emerge trees, skies and wheat fields – in fact, the elements of a landscape which always comes back to the surface, because, as Henri Bergson used to say, conscience and the world are tightly bound to each other, and the image cannot be but the link between matter and memory. A landscape – a real one most of the times (see for example “The fear of separation”) – which the artist observes through the eyes of a child, as if one could build up one whole world from a single image. For this reason, the catalogue does not merely present a sequence of painting: each work is accompanied by the first frame of a film, conceived, realised and interpreted by the artist and photographed by Cristian Iotti (except the last shot, taken by Carlo Vannini). Many different plots, sketched out and then just left open like in Italo Calvino’s novel “If on a winter’s night a traveller”, where only in the last pages the different openings merge into one single discourse, into one pictorial “Journey” during which Barbara Pecorari’s paintings, at first photographed one by one in a poplar grove, in front of a church or on a theatre stage, eventually line up along the road taken by the artist and, with her, by those who wish to know the continuation of her story.

Some painters stake everything on technique (and so they risk to descend into commercial clichés); some painters only pursue their ideologies (but they end up to become somewhat abstract intellectuals); some painters are artistically poor, but let us leave them to themselves. Then there are (a few) painters who tell complex stories, somewhat dramatic, for which they are not just the authors, but also, and especially, protagonist actors and even figurative elements in the painting, together with trees, skies, church vaults, wheat fields, pictures hung on branches like sheets hung out to dry.

Barbara Pecorari belongs to this handful of brave artists for whom inventive and imagination are a creed and a way of living. In occasions like this, we are not merely talking about an exhibit or a volume / catalogue: it might be a happening, it might be a travel through times or in the country around our home place; and if it was fashion show? an oriental dream? a comedy or a horror film?

For sure, this is a new way of working on painting by keeping the traditional characteristics of the “painted” picture and yet by “paging” it – instead of by means of usual frames – with landscape glimpses, train station platforms, monuments to ride, dancer stages, ancient arcades, mysterious night time apparitions, solitude deserts, oceans with waves clotted like chinks.

And she is always inside there, the author – actress – painter (they look like many, because they are different and interchangeable) in a perfectly articulated scenario and in a scenery which is always new and seemingly invented, where movements, however, are well calculated and synchronized.

It is an impossible journey in a non-existing space, with no starting point and with an enigmatic outcome. What more could you wish for…?

Barbara Pecorari is a friend of mine. She is not only good. She also shares a lot with me. Number one, we are both unconventional artists who do not allow repetitions. We both like to keep changing themes and inspiration (and possibly even techniques). Number two, we both reside somewhere across the borderline between the province of Parma and the one of Reggio Emilia, which is – I believe – quite positive both form an artistic and a social point of view, as this area merges the elegance and the culture of former Marie Louise’s city and the practical, organized entrepreneurship of “Tricolore” city (the city where theItalian three-colour flag was born).
Ok, we may well be parted by onefull generation, but after all, what are some thirty years as comparedto infinity…! However, I am always very pleasedto promote a young, deserving artist.
In this case, this unique diarycatalogue(first released by Barbara a few years back and comingtoday in a more mature but yet very peculiar and exclusive style)gave me the opportunity to reinforce a personal relationship anda pictorial collaboration under the leadership and the directionof Tiziano Marcheselli, another most amazing artist who wrote forBarbara no less than a quatrain «poem» disguised in the book in form of foot-notes. The idea of a catalogue that is also a book and a diary must have pleased him just like it did to me.
The ordinary celebrating texts are replaced by photos and pictures that look like the short notes of a journey or the agenda of the artist containing ideas painted with a superior technique and souvenirs
of the places she mostly loves (either countryside or monuments), of her friends (although a bit extravagant ones) and most of all of by that touch of performance that provides a sparkling style without ever being conventional.
Let us then welcome many more initiatives of this kind, to stir and rejuvenate an art branch risking paralyzing in the «déjà vu» and the «tried out ».

Five years after our first meeting, looking back to what it was and what it is, both Barbara and I are quite happy about the way things turned out to be.
I have started Artemoddes, a socially useful NPO that will introduce emerging talents while Barbara has matured her expressiveness and is living her dream. “Taking ideas out of imagination and creativity into real world is not an easy task but you achieve it, your dreams come true”. This quotation welcomes visitors to the web page that I determinately wanted to create to provide greater visibility to emerging talents. Something difficult to do through traditional channels. Barbara asked me to be in her catalogue and I have accepted her
invitation with excitement. Barbara and I understood each other immediately. We have a sense of mutual respect that has not faded through the years; rather, it has strengthened and created a strong bond that will withstand time and distances. I immediately realized that she was an artist who is continually looking for ways of expressing her inner fire.
When she paints it seems as if her hand is driven by explosive emotions. However, we should not forget that every artist should be able to create emotions without worrying about what they do and they should do. They should transform their work from a real object to an emotional subject thanks to the emotions that they bear inside themselves.
The journey Barbara made in the recent years has led her to found her own law of shapes and colours. Without being disrespectful, conceited or without using flattery, I think I can compare Barbara to Cezanne in terms of ability of observing an object and being able to transport it on to the canvass with the shape of her emotions. 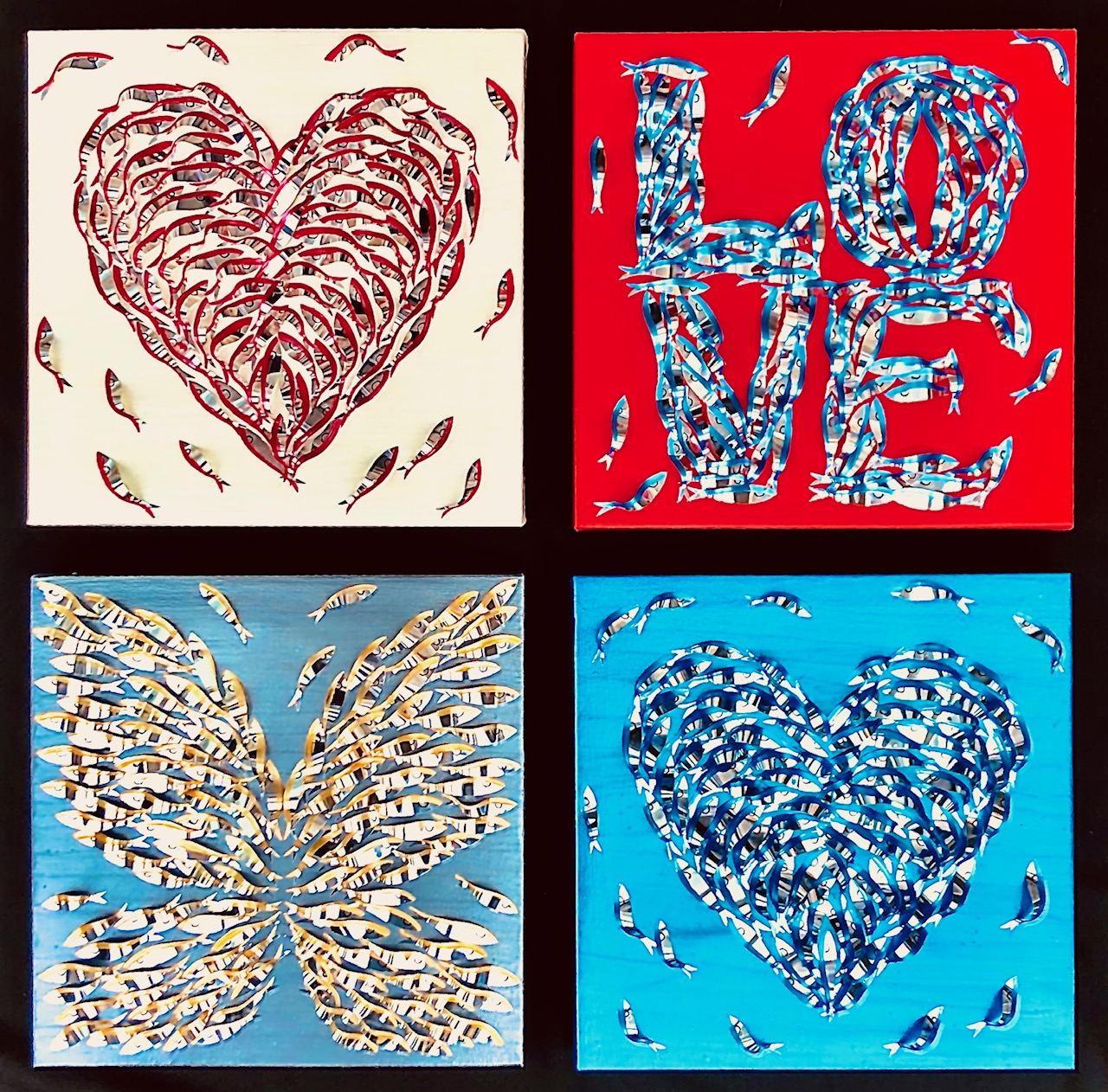 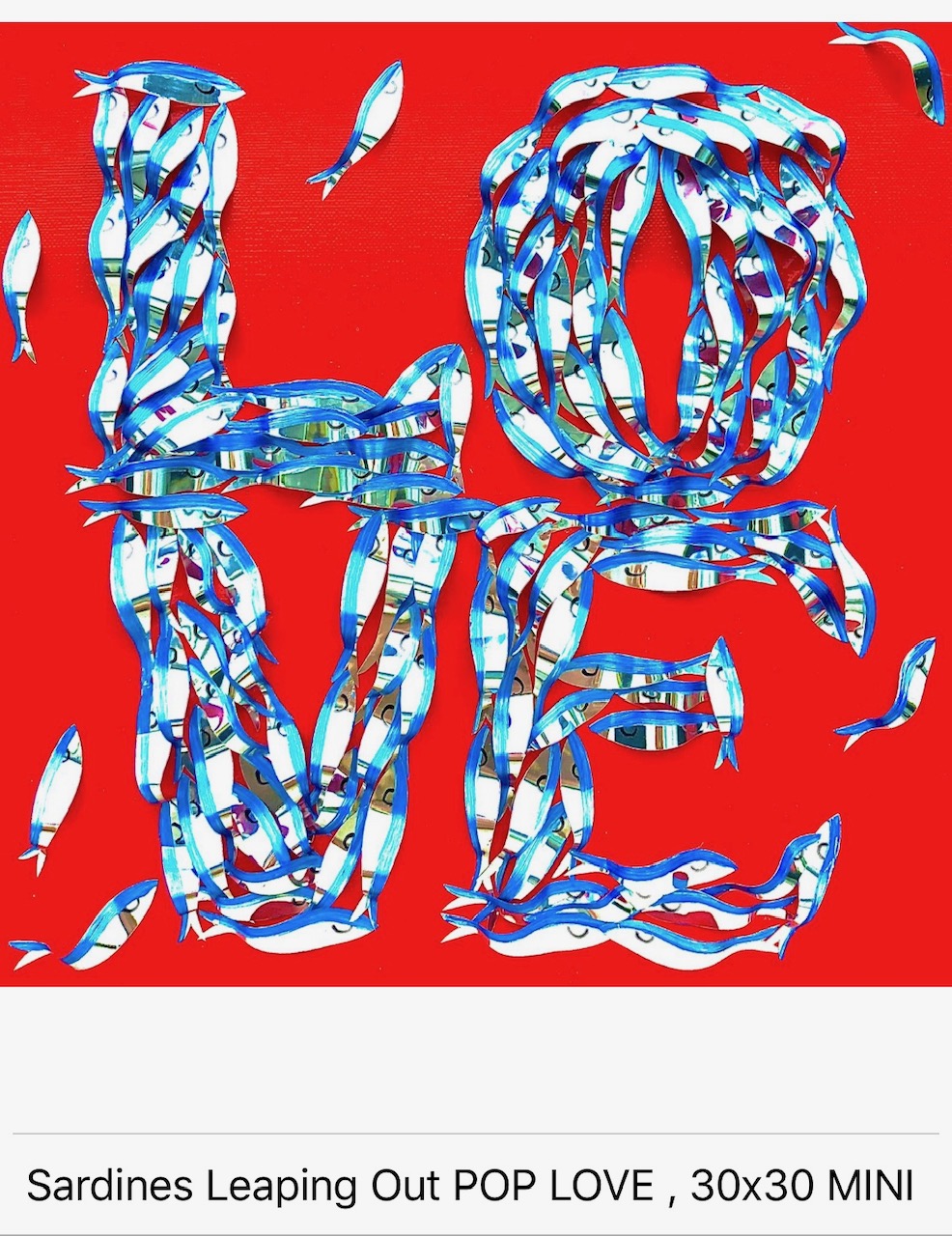 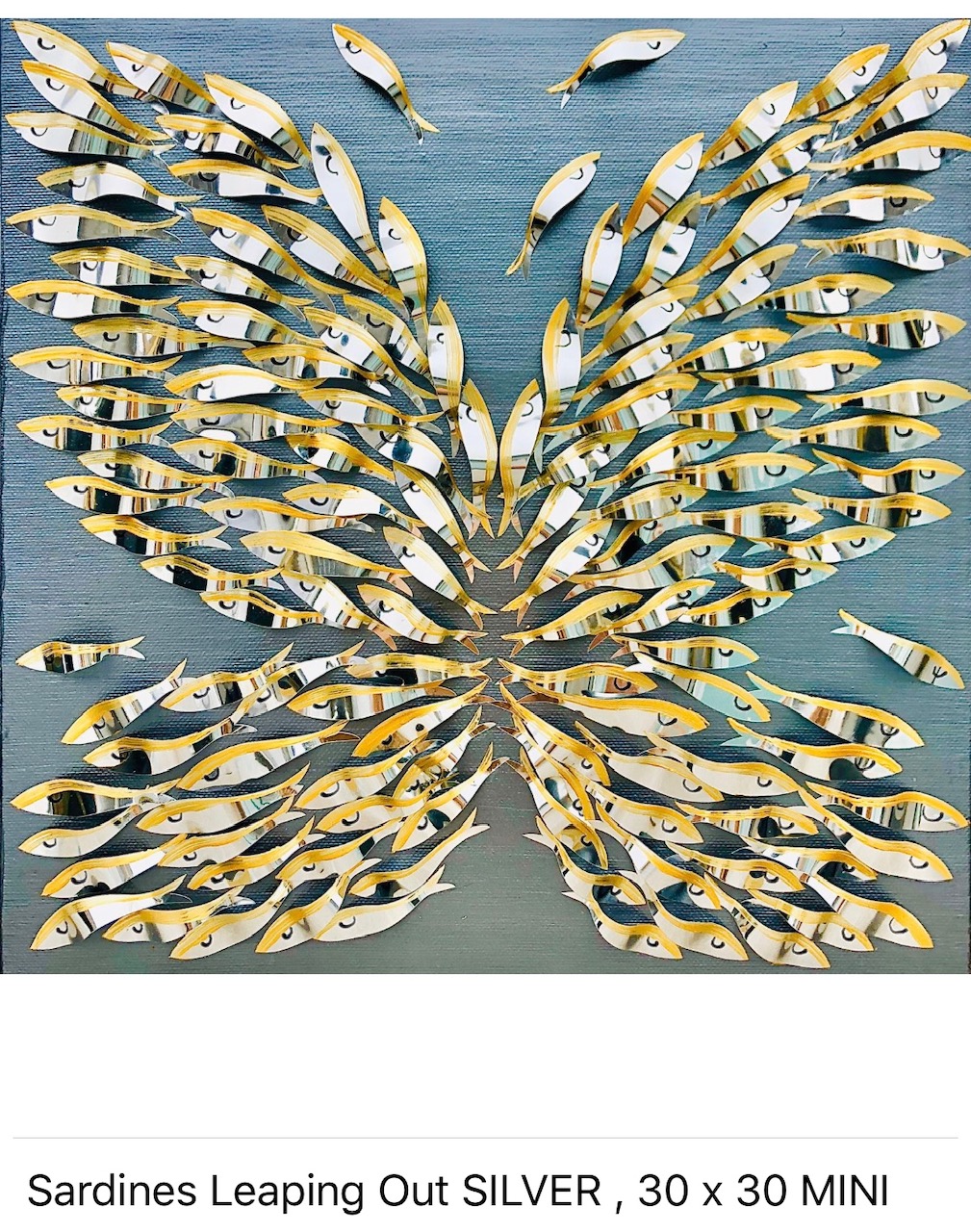 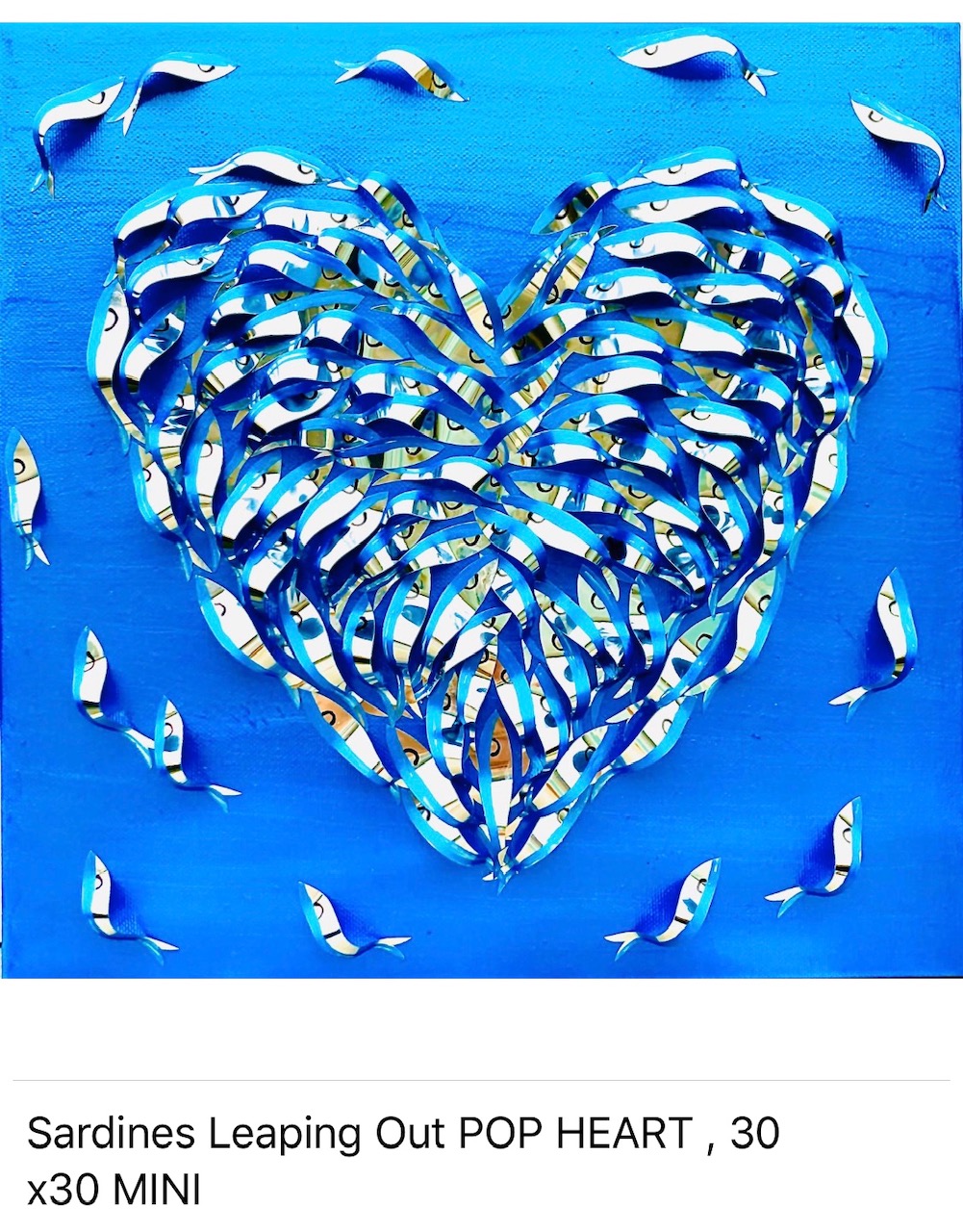 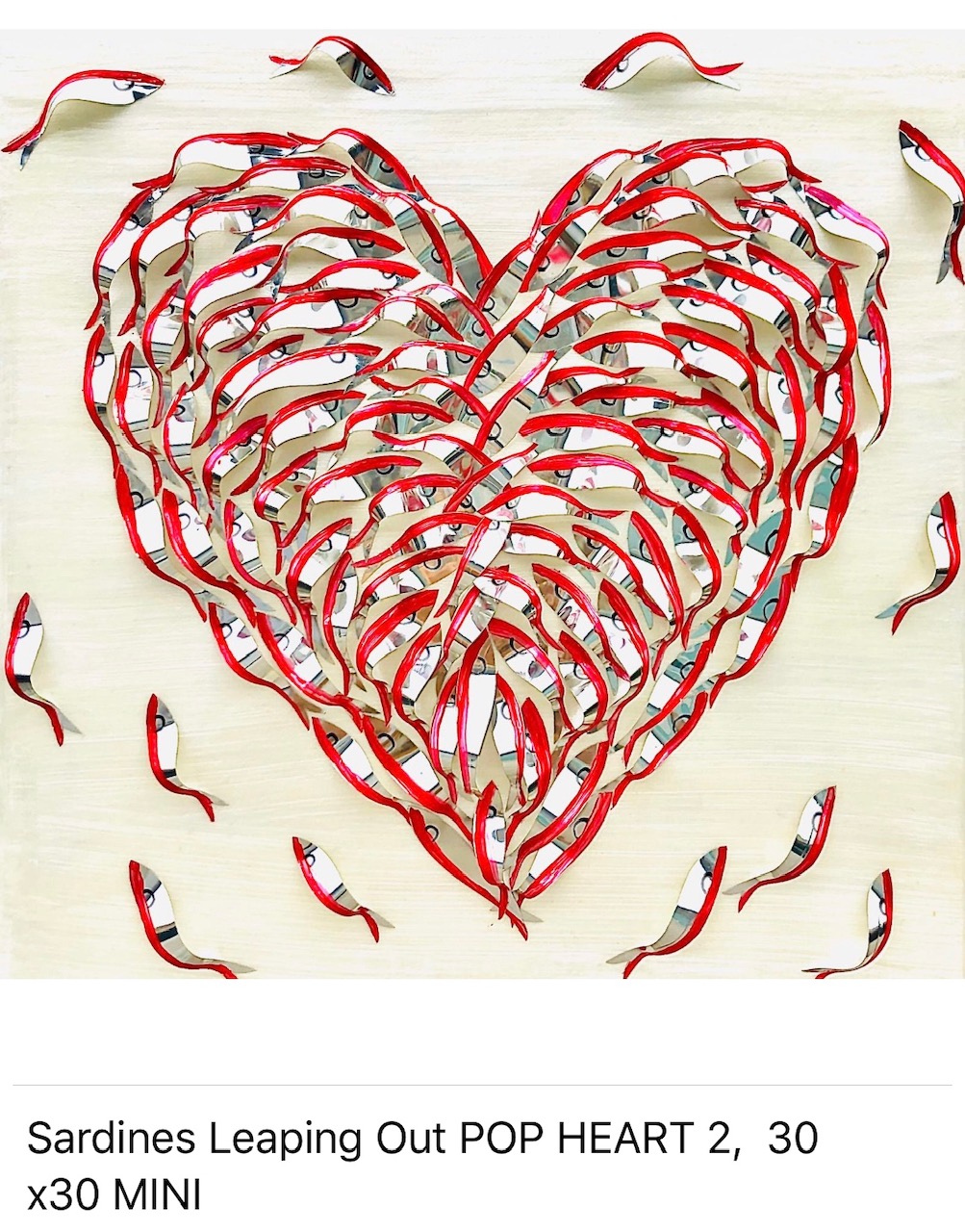 the works are for sale exclusively on ArtOnline20 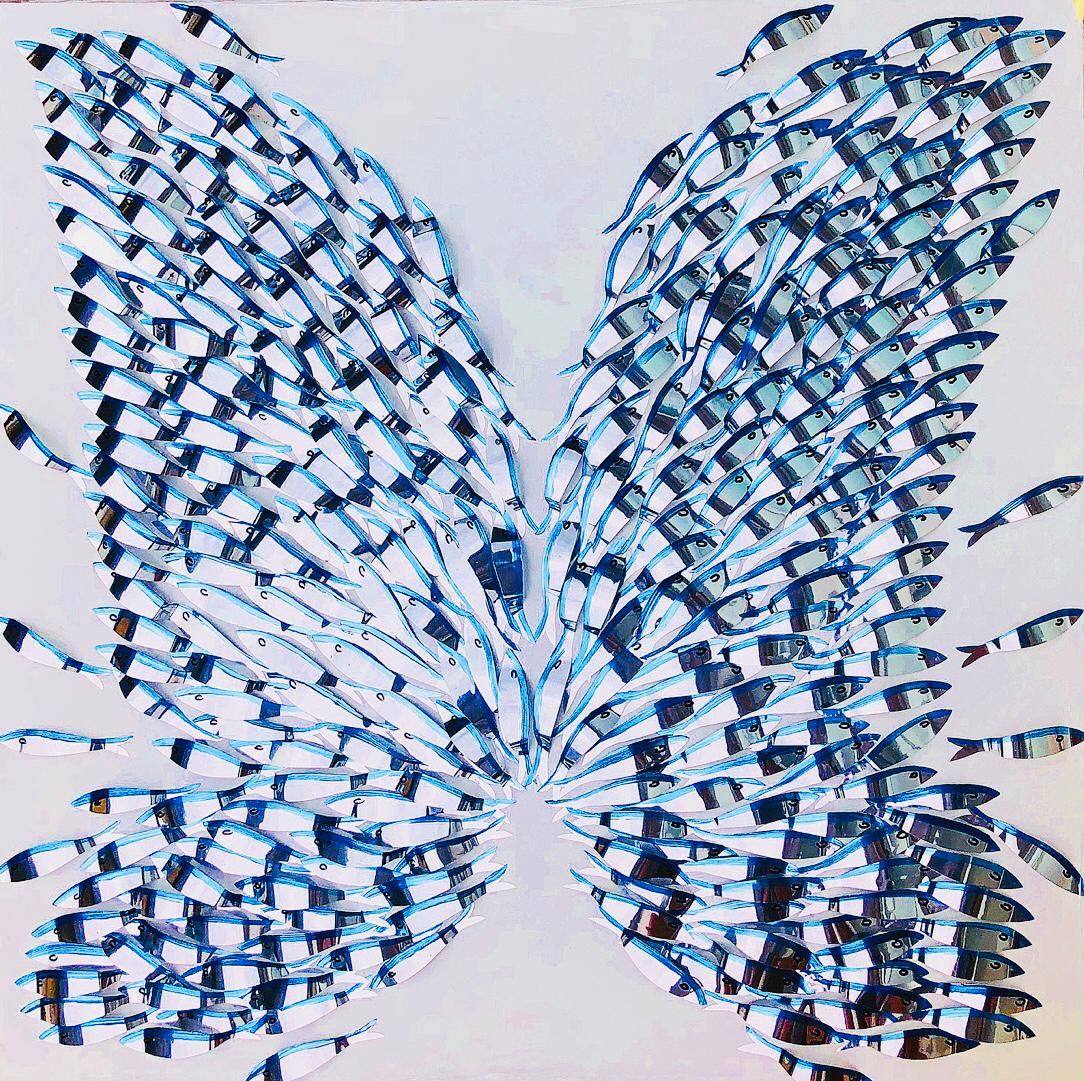 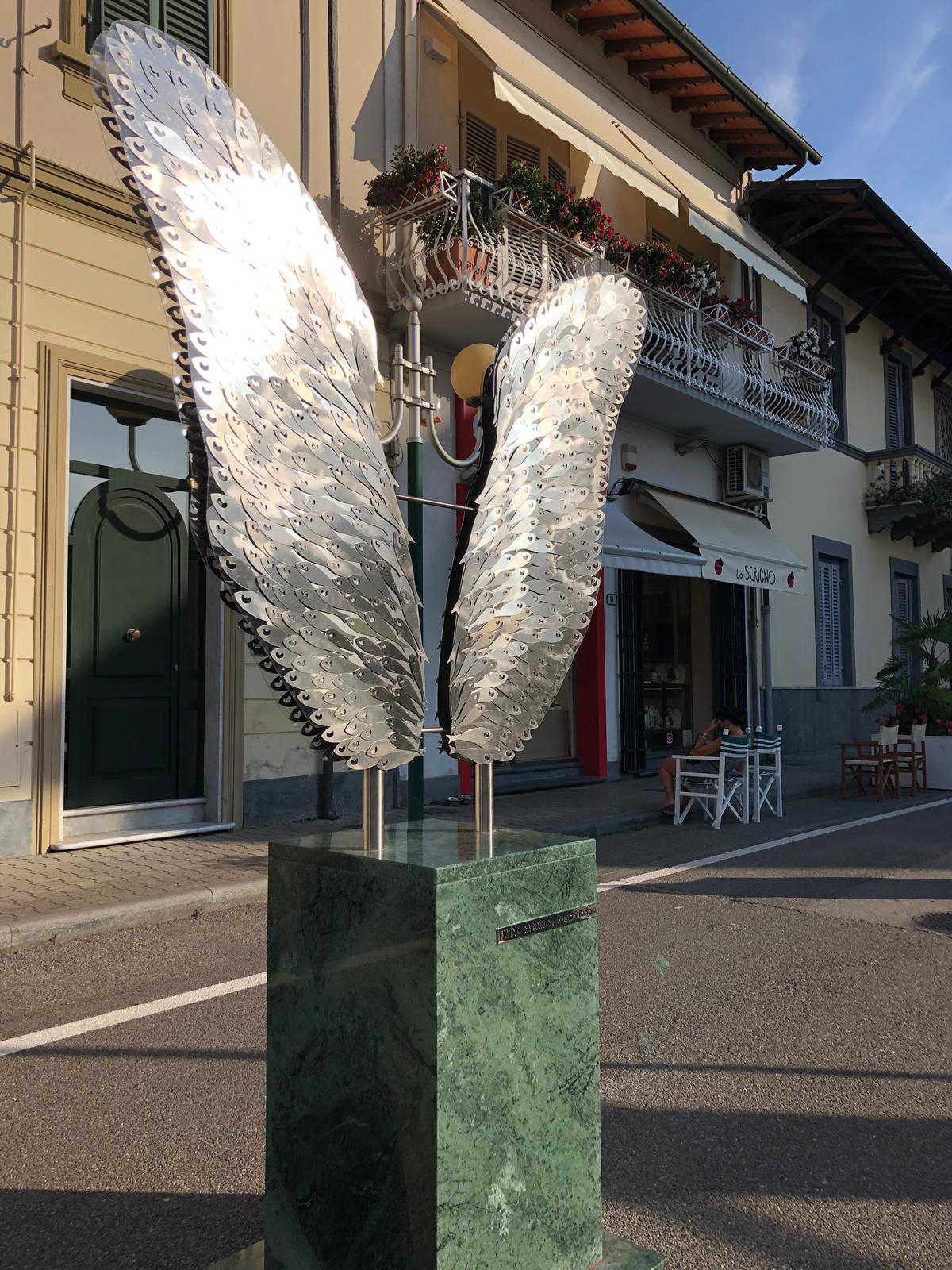 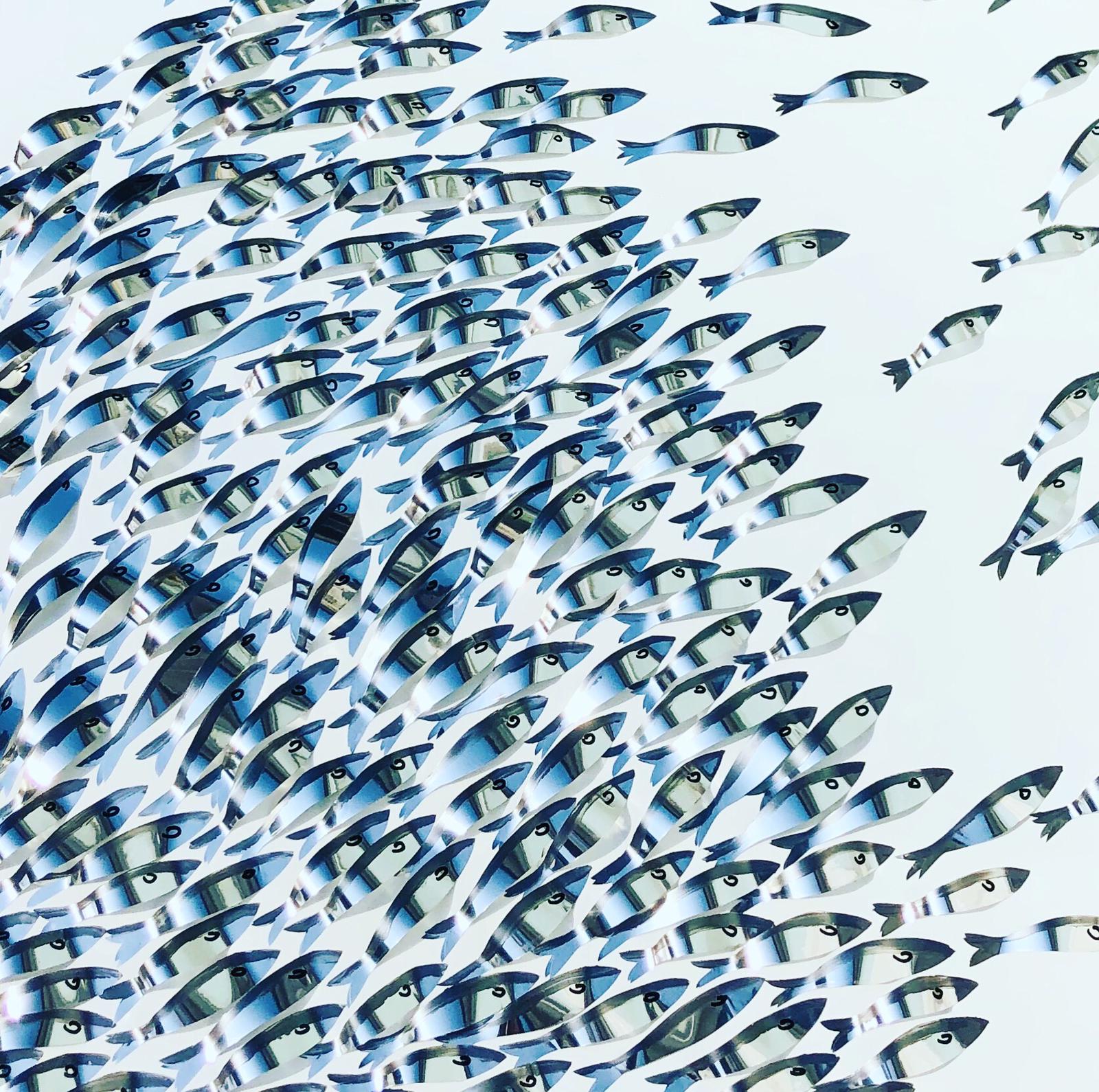 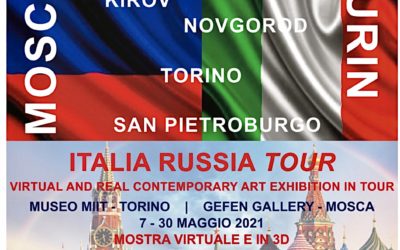 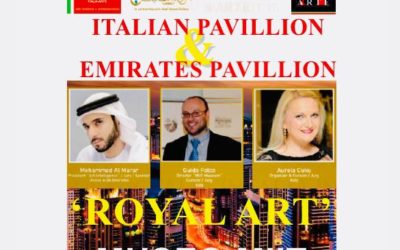 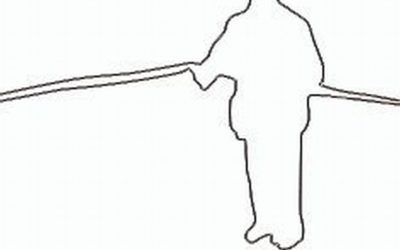 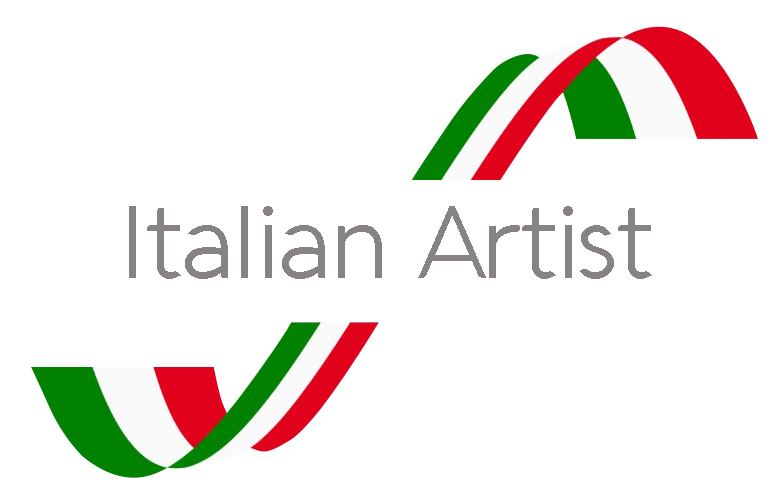